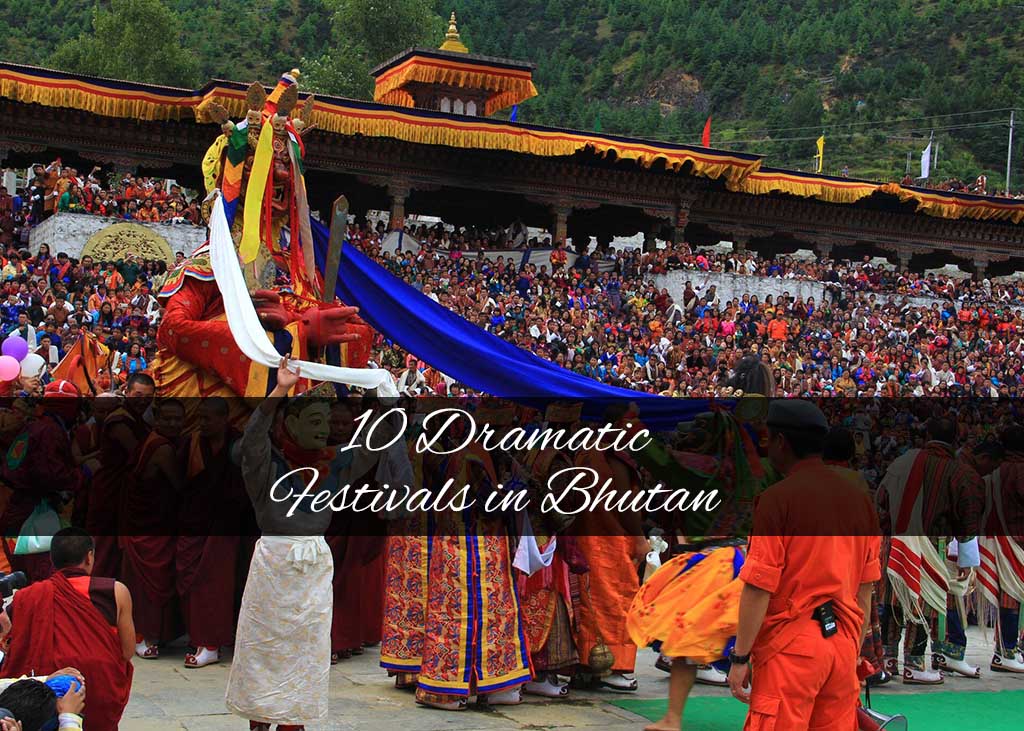 Bhutan festivals have a long history and represent diverse culture and traditions from different eras. The festivals are very special in the eyes and heart of both Bhutanese and tourists visiting Bhutan.

Bhutan springtime festival, the paro tshechu is one of the country’s most remarkable and important events.it is held in the paro ringing dzong to commemorate padmasambhava’s also known as guru rinpoche birth anniversary.during this festival,monks and local people celebrate together with local dress up in a beautiful attires as well as a dramatic mask dance depicting devils and god.many cultural events are held throughout the festival which is of five days,including a mask dance performance by monks inside the festival ground.The biggest draws of this festival in Bhutan is the display of a old religious scroll which is of 350 years old and it is the primary attraction of Festival. The festival, which has religious significance, allows visitors to see a unique dance form of bhutan,the mask dance which is performed inside the dzong’s courtyard.

The another popular festival in bhutan,Thimphu Tshechu is held every autumn from the 11th to 15 day in the month of eighth of Bhutanese calendar.it usually falls in late September or early October.The festival is held in the Tashichoe dzong which is a fortress and monastery in thimphu’s northern district.This iconic festival attracts thousands of people dressed in beautiful and colorful attires to the tashi choe dzong fortress courtyard to witness all the exciting festivities.The dzongs courtyard where festival are held is always packed because local believe that watching ritual mask dance helps them gain high merit and release their sin. In terms of participation and audience,the paro and thimphu tshechu are two most popular in Bhutan.Apart from local residents,these unique colorful and exciting demonstrations of Bhutanese traditional culture draws many tourists from all over the world.

The punakha drubchen is also a well known festival held annually in punakha which is located in western side of bhutan.This festival in Bhutan is popular in the country because of its historical significance. It commemorates Bhutan’s victory over Tibet invading forces and the country’s unification as a nation.its depicts a dramatic reenactment of battle between bhutan and tibet.The sacred mask dance and folk dances will be performed in the festival to show you about internal conflict and exterior invasion.The Buddhist saint called zhabdrung ngawang namgyal is known to be unifier of bhutan and he was the one who gave bhutan and its people a unique cultural identity that distinguishes them from rest of the world.Therefore the festival celebrates the victory and pay tribute to the past warriors and the saint zhabdrung ngawang namgyal.

The Jhumolhari mountain festival is a two-day festival held every year in month of October at the base of Mt.jomolhari by communities located along one of bhutan most attractive trekking trails. The festival is an opportunity for members of whole Jhumolhari community to gather together to enjoy and celebrate their cultural heritage and also learning about ecotourism potential in the region.The festival also increased awareness about snow leopard conservation through changing local community members perceptions and attitudes about the endangered species.it honors the culture of the people who live in harmony with natural treasures that surrounds them. The Jhumolhari region is home to some of Bhutan’s most active snow leopards and also blue sheep habitat. The festival is truly unique and held at a location where the views and surrounding snow-capped mountains provide a relief break from the city pollution and crowds.

The royal highland festival was first held on October 16 in the year 2016 at highland of gasa to commemorate his royal highness prince birth; 400 years of zhabdrung ngawang namgyal and 60 year circle of guru rinpoche birth year.The event gathers Highlander from all across bhutan together to share their values,knowledge,skills and best practices related to highlands and yak farming.The royal highland festival also contribute to the preservation of Highlander traditions.during the occasion,many traditional songs and dances are performed.It also celebrate the natural beauties and wonders of highland place,as well as its history,traditions,culture and finally to share the authenticity and simplicity of Highlander life with the visitors.The festival is a highlight of gasa dzongkhag. “Good to Great Gasa” Initiative, which was inspired by his majesty vision to make our country great.

A dazzling white stupa of trashiyangtse

Another dramatic festivals in bhutan is a druk wangyal festival which is performed by royal bhutan army rather than monks or lay people.The celebration is a tribute to his majesty king jigme singye wangchuk, the 4th king of bhutan for his wise leadership.it also honors the royal bhutan army unwavering commitment in safeguarding the country sovereignty and stability.The festival was first held in year 2011 to commemorate his majesty the 4th king victory over indian insurgent forces in southern bhutan in 2003 and is celebrated every year in winter.

The black-necked crane festival is held every year at gangtey goenpa’s courtyard in the beautiful phobjikha valley.The celebration provides an opportunity for people to rejoice and celebrate the arrival of this rare and magnificent bird,which becomes an essential part of their daily life throughout the winter season.The annual festival was first held to raise the awareness for endangered birds and is now one of the most spectacular events performed in festival.The community renews their connection and commitments to the birds through a series of songs and crane-themed dances,while also promoting conservation spirit and highlighting their cultural heritage.

This vibrant festival of haa valley is held every year in July.The festival display the bhutan nomadic people lifestyle as well as their religion,traditional songs,dances and music.during the event,a colorful graphics and lively paintings are created to depict some of the most significant occasions and cultures of the nomad people.The interesting thing is that tourist are welcome to participate in some of the entertaining activities like yak riding,folk dancing and various cuisine tasting.

varieties of mushroom exhibition to audience

Matsutake festival is two day mushroom festivals in bhutan held at the beautiful ura valley of bumthang.The varieties of mushrooms that are found only  in bhutan are showcased  during this event and if you are a passionate foodie then this festival is ideal for you as you can taste various food.The tourist will enjoy the matsutake festival and they can also engage in mushroom picking excursion and learn about rural bhutanese life.The event is great way to experience a perfect blend of mouth watering local dishes and luxury of nature.

If you are visiting Bhutan for the first time, we would recommend you to visit the Paro Festival, Punakha Festival or the Thimphu Festival.

You will find more interesting read on these festivals here below: