Why is Bhutan so special.

Bhutan is often called the “Land of the Thunder Dragon,” or “Druk Yul,”. You also hear Bhutan being called the “Last Shangrila” because the country opened to the world only in the 1990s and since then visitors have been regulated to Bhutan to preserve the environment and culture. Not many in the world have been to Bhutan.

Bhutan is the perfect destination for nature lovers who come to the magical country to discover themselves in a fun way and maybe to become more self aware.

The peaceful atmosphere, fresh unpolluted air, clean roads, and rivers are some of the first things that guests feel and see when they are here in Bhutan. The small country offers more than just its untouched environment and beauty. The small Himalayan country surrounded by economic giants like China and India is very much known for its rich history, culture, and heritage.

Bhutanese people pride themselves on being kind and friendly towards strangers. This tiny mystical country prioritizes its citizen’s happiness above all via Gross National Happiness (GNH). That is why Bhutan’s crime rates are very low and violent crimes are almost non-existent.

The Kingdom is carbon negative since the people and nature coexist in harmony. As of November 8, 2020, Bhutan’s population is 7,71,601. Do read to know more about why a small mystical nation like Bhutan is special.

Is Bhutan really the only Carbon Negativecountry in the world?

How did Bhutan deal with Covid-19.

Bhutan was the one and only carbon negative country in the world. Now there are a few small countries like Bhutan who are on a mission too. Bhutan’s constitution states 60% of the country must be under forest coverage at all times. Currently, 72.4% of Bhutan is covered with forest, protecting its wildlife and nature. The country’s primary revenue sources are mainly Agriculture (80% of the population are farmers or involved in it), the Hydro Power Project, and tourism. This is why protecting forests and nature is important to the Bhutanese. And human beings are naturally happy and in a good mood when surrounded by nature.

Bhutan closed its doors to the outside world on 5th March 2020 due to the rapid increase in Covid cases worldwide.

The Bhutanese government’s wise initiative locked down the nation to prevent the spread of the virus in the country. This lockdown happened after a 27-year-old female returned from Kuwait tested positive during her second RT-PCR test. After her first negative test result, she traveled to various Dzongkhags (cities) that increased the risk of spreading the virus.

Government and Dessups (Volunteers from all walks of life, the guardians of peace during this pandemic initiated by the King) patrolled and supplied the necessities to its people. The 5th Dragon King provided Kidus (Royal Grants Relief) to his people who struggled due to the virus.

Bhutan finally opened after 2 years to visitors on April 1st, 2022 in a controlled and regulated manner for the safety of its citizens and for the guests. We can say that Bhutan is one of the safest destinations to visit now.

Read a little if you are planning to visit Bhutan – https://www.drukheritage.com/is-it-safe-to-visit-bhutan/

Are Bhutanese people nice to outsiders

Why do Bhutan Limit Tourists.

Past visitors rate the Bhutanese as welcoming and friendly to foreigners and that is one of the main reasons for their wonderful experience in the country. The Kingdom of Bhutan is a Buddhist country and strongly believes in being kind towards others. That is why you will never find a local harassing or being rude towards guests and visitors. Being kind is simply a natural instinct for Bhutanese. 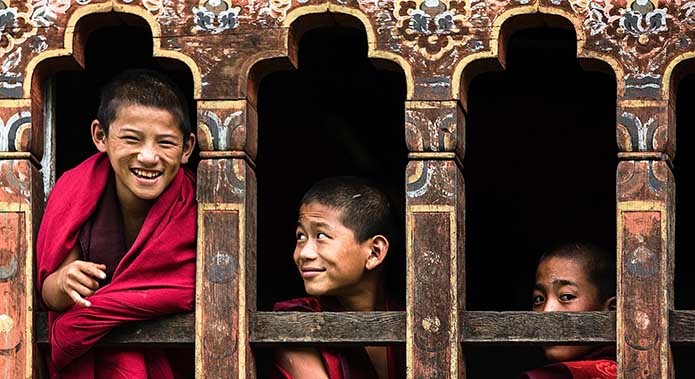 Why does Bhutan Limit Tourists? The Tourism Council of Bhutan (TCB) and the 4th Dragon King created the policy of “High Value, Low Impact” in the 90s. This policy helps Bhutan maintain its untouched environment, culture and keeps mass tourism away.

The minimum daily fee of USD $250 per person per night that guests pay to visit Bhutan, though seemingly expensive at first glance, when calculated, is reasonable enough and provides value to the guests. The tariff covers your visa fee, a licensed guide, driver, transportation, accommodation at 3 stars hotel (homestay and camps can be arranged), entrance fees to tourist sights, all meals, trekking gear, and all the taxes you are required to pay. The only costs not covered are flights (in and out of Bhutan), souvenirs, alcohol and tips for your guide and driver if you are happy with their services.

During peak seasons of March-May and September-November, tourists will have to pay a daily tariff of USD 250 per day all inclusive.

For the low season of December-February and June-August, the daily tariff comes down to USD 200 per day all inclusive.

What does Gross National Happiness (GNH) mean to Bhutan. How is it measured

Does Bhutan have traffic lights

GNH was created by the 4th King of Bhutan for his people. The King created GNH policy for the happiness and wellbeing of his citizens while preserving the culture and environment.

Bhutan’s government came up with 4 pillars of GNH. They are:

Bhutan does not have traffic lights and the government wants to keep it that way. Life without traffic lights is possible and it is good for the environment and aesthetically adds beauty to the city. Instead of traffic lights, you will see our Traffic Police giving directions.

This has become a tourist attraction as well.

What is Bhutan known for

Bhutan is snuggled between the steep mountains of the Himalayas, making the only international airport in the country, Paro Airport, one of the dangerous airports in the world. Only 8 best pilots in the world are qualified to land in Bhutan. Flying to the country is one of the most thrilling and out of the world experiences. The beautiful views of the Himalayan mountains and landing close to the valleys are a once in a lifetime experience.

Bhutan is known for its colorful and exciting festivals. It is an ancient expression of our Buddhist culture. The unique clothing, dances, and masks tell you the story about life after death. How each action you take after you are born affects you after death. Bhutan is also known for Gross National Happiness, the place to hike and trek, beautiful architecture, organic products, to practice spirituality and much more.

Is Bhutan a Fairytale Kingdom

Unlike other countries in history where people protested against absolute monarchies, in 2006, the 4th King of Bhutan gifted the people with a democratic constitutional monarchy even though Bhutanese did not want it.

Not only is this a historical moment for the country and its people, but the 5th King also married a commoner that was covered by international news media, comparing the 5th King and the Queen of Bhutan to Prince William and Duchess Kate Middleton.

The mysterious Kingdom of Bhutan has made a name for itself. From being called the Last Shangri-La to being known as the only carbon negative country, this mystical and almost fairytale-like country has earned every title. The charming sceneries, friendly hospitality, history, and culture, make up for every amount you spend in Bhutan. Go ahead and put Bhutan on top of your “Travel Bucket List” if you haven’t already, and do remember the “High Value, Low Impact,” tourism policy that regulates mass tourism into Bhutan. You will feel the difference when you are here with us.