13 Places to Visit in
Trashigang District

Tashigang is one of the 20 districts in the country with a charm of its own. It is located in the eastern part of the country. It is referred to as “Jewels of the east” It shares a border with Arunachal Pradesh in India. The district is 551 kilometers away from Thimphu, the capital city. The elevation varies from 600 meters to nearly 4500 meters above sea level.

The climate is primarily temperate, with annual rainfall ranging from 1000 to 2000 mm. This is also a place where the semi-nomadic inhabitants of Merak and Sakteng, whose clothing stands out from the ordinary Bhutanese Gho and Kira. Travel to Tashigang because it is the greatest place to visit if you want to immerse yourself in the beauties of nature and ancient indigenous traditions. 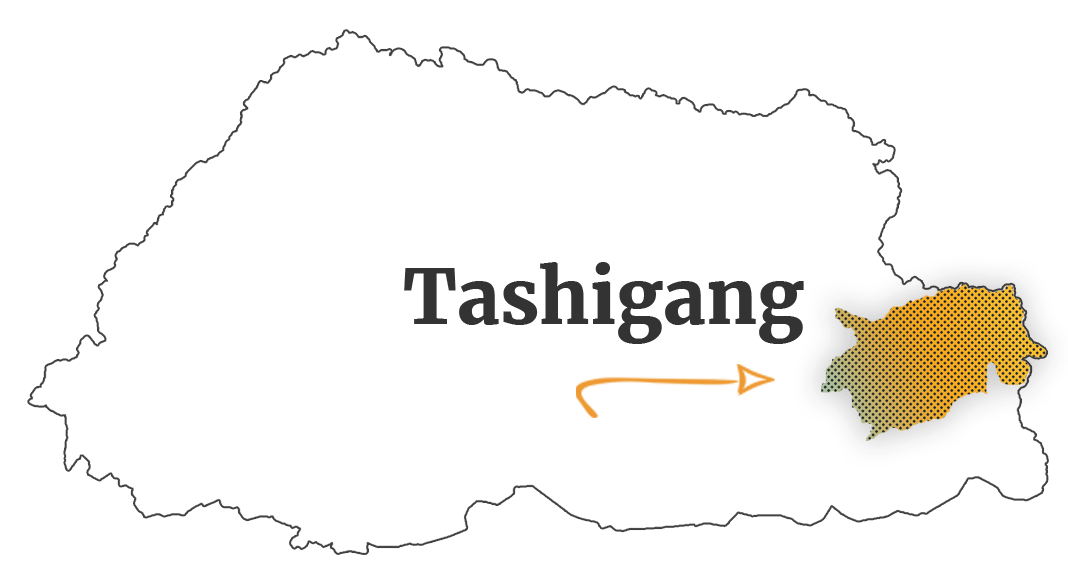 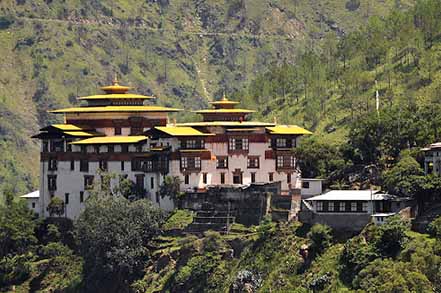 Artistically Engineered Fortress of the Trashigang

Trashigang Dzong majestically built on the edge of the steep cliff overlooking Dragme Chu and Gamri Chu river. It was built in 1659 to protect itself from the Tibetan invasion. Essentially Dzongs or the fortress are constructed for religious, administrative and for defensive purposes.

Trashigang Dzong, is built around a rectangular courtyard surrounded by ancient damaged walls and has a single entrance on the south side. It is used both for administrative and for religious purposes. You will most certainly be excited and captivated by the artistic design of the dzong being built if you take a trip to Trashigang. 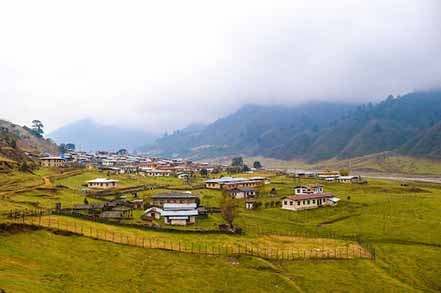 Sakteng Wildlife Sanctuary is located in the easternmost part of the country. It covers roughly three-quarters of Merak and Sakteng gewogs and a portion of Lauri gewogs under Samdrup Jongkhar Dzongkhag, with a total size of 740.60 square kilometers. People from remote nomadic tribes called “Brokpas” live in the Sanctuary. This sanctuary has been designated as an important landmark of the wild animal and diversified ecosystem by Tourism Trashigang. 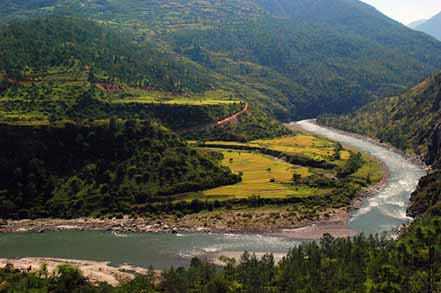 Drangme chhu is a Dzongkha word that translates to “river” or “water.” The river rises in India’s Arunachal Pradesh and flows southwest, first through Bhutan’s Trashiyangtse district/Dzongkhag and subsequently into Tashigang. Drangme Chhu is also Bhutan’s largest drainage, covering roughly 18,300 square kilometers and serving as a vital link between the Bhutanese Himalaya and the Indian subcontinent.

The Drangme is joined by the south-flowing Kulong and the west-flowing Gamri near Tashigang. As it flows southwest, the river defines the border between Trashigang and Mongar, then Pemagatshel and Mongar. If you make your trip to trashigang you will see this astonishing river flowing through the big mountains and valleys. 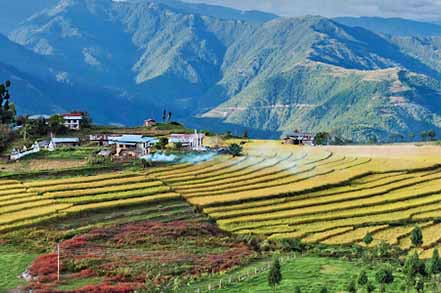 Radhi village is located 30 km to the east from Trashigang. It is elevated at the height of 1,080 to 3,220 meters above sea level. The gewog/subordinate municipal division is bordered on the south by the Merak Gewog, which is characterized by pastoral farming, and on the east and west by the Phongmey and Shongphu Gewogs, which are dominated by mixed pastoral and arable farming. Radhi is renowned as the ‘Rice Bowl of the East,’ because it supplies the majority of the grain to the country’s eastern regions and sometimes even to the west.

Radhi village is known for two things: its rice fields and its weavers’ expertise. Traditional natural dyes are used to tint the raw silk, which is then woven on a traditional loom by highly trained weavers. Paddy, maize, soya bean, potatoes, and vegetables are some of the agricultural products produced by the local people in radhi. 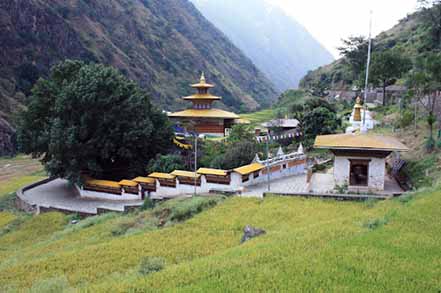 Gom Kora is a tiny Lhakhang located around 21 kilometers north of Trashigang. It also serves as a point of entry to Trashiyangtse (One of the districts). Gomphu means “a hallowed meditation spot of Guru Rinpoche” and Kora meaning “circumambulation.” Since the dawn of time, the Gom Kora, has been the top pilgrim and on devotees bucket list. It has an immense collection of historical murals and holy treasures. Travellers can visit the ancient shrine at Gom Kora built by Gongkhar Gyal in the 10th century if you travel to Trashigang.

One of the interesting things about visiting this monastery is that you can visit Gom Kora to observe the magnificent old shrine built by Gongkhar Gyal in the 10th century. The monastery is also known for its beautiful ‘circumambulation’ event that takes place from 23rd to 25th march every year. During the festival people gather and celebrate with finery dress and worship for peace and prosperity. 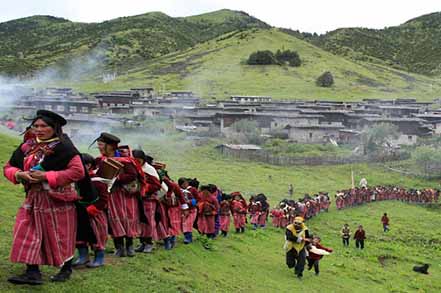 Merak valley is located to the far east of Trashigang. This place is profoundly the home of “Brokpas” which means the highlanders. Just like the people of Laya, Lingshi, and Lunana they also live a semi-nomadic lifestyle. One of their key activities is raising domestic animals for their livelihoods. Every year during the autumn season, the inhabitants of Merak travel to higher mountains to honor their protective deity, they mark the events by performing several activities such as a horse riding race, and perform mask dances. If you take a trip to Trashigang during this period you will be fascinated by their distinctive art of living and culture. 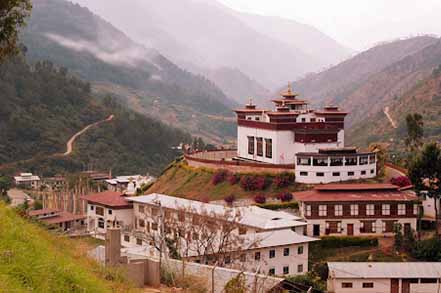 The Place of Wisdom and Dharma

Rangjung, a small town in Trashigang’s Radhi Gewog, is one of the greatest spots to visit in the district. This is a lovely town perched on the crests of hills with breathtaking vistas. People are so friendly and inviting here.

Rangjung is known for its majestic Woesel Choeling Monastery, founded by Dungse Garab Dorje Rinpoche in 1989. The monastery’s mission is to create a welcoming environment for the study of Buddha dharma as taught in the Dudjom New Treasure Lineage, as well as to carry out dharma activities for the benefit of the Buddhist community in and outside of the country. 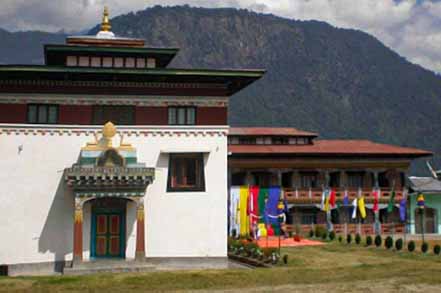 Khardung Anim Dratshang was established by Dungse Garab Rinpoche as a branch of Rangjung Woesel Choeling Monastery. A beautiful monastery can be seen in Radhi village. It’s a pious nuns’ convent where young nuns participate in religious practices and activities for the welfare of all sentient beings.

The statue of Khelo-Chosun is the most important relic inside the temple. If you wish to learn more about their way of life and want to travel to Trashigang, you can stay near the dratshang for an overnight stay to practice and witness their activities; additionally, if you have wish to gain pure and divine mind, you can join them in morning and evening prayer too. 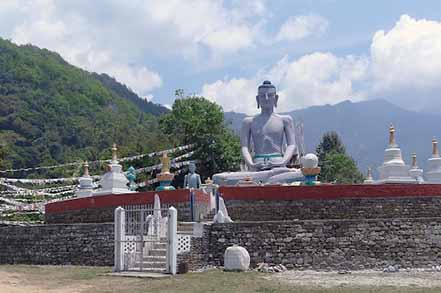 Visiting this monastery will endow you with a powerful aura that will rejuvenate your spirits and provide you with a sense of calm and tranquility. Because the monastery’s surroundings are so pure and divine, you can concentrate for a while to train your mind, which will undoubtedly aid you in having a clearer vision for your life. 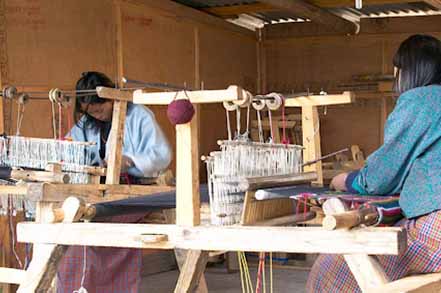 This weaving centre is located on the Trashigang and the Samdrup Jongkhar route, It is about three kilometers from Khaling. Bhutan’s National Women’s Association is in charge of this project. 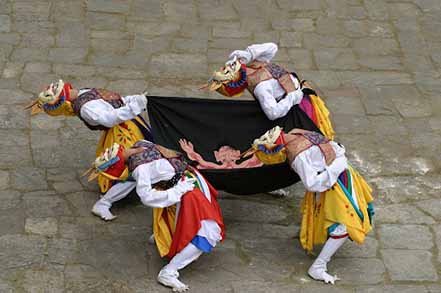 Tshechu; An Events of Mask Dances and Religious Festival

Trashigang tshechu is one of the biggest festivals in the east. It is held from the 7th to 11th days of the tenth month of the Bhutanese calendar (December). During the festival, a large number of guests arrive from all around eastern Bhutan. The Brokpas, a nomadic community from Merak and Sakteng also attend the events, with their distinctive clothing and appearance makes it look unique and captivating.

Sacred mask dances, as well as traditional folk music and dances, are performed during the celebration. The unfurling of Guru Tshengyed’s thongdrel (huge tapestry) is the festival’s centerpiece (eight manifestations of Guru Rinpoche). A Neten Chudrug (Sixteen Arhats) thongdrol is also unfurled for the public. 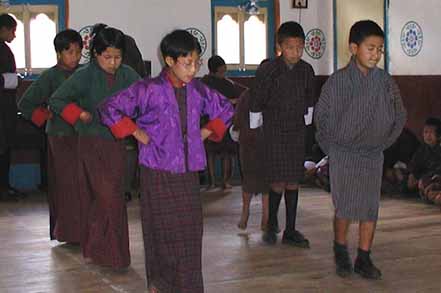 This school was established for the impaired students in 1973. The school’s costs were covered by a Swedish Women’s Mission and the Christian Blind Mission. Furthermore, they also purchase equipment and resources for the blind’s education.

Since its founding in 1973, the school has educated approximately 160 visually challenged children. The school educates pupils from pre-primary to class six throughout Bhutan. When the pupils reach class seven, they are incorporated into the local Khaling school. 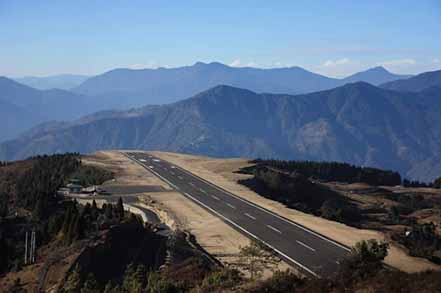 Thrilling Airport on the top of Yonphula

Yonphula airport was inaugurated in the year 2012 after redeveloping an abandoned military airfield established in the 1960s. The airport is located 9000 ft above sea level. Several works have been done before it was fully approved to use it. However, even after upgrading it still poses challenges due to its location and the capricious weather conditions. The runway to international standards was reopened the airport on October 8, 2017 by Former Prime Minister Dasho Tshering Tobgay.

Here are 9 places to visit in Zhemgang District known for its national parks, nature preserves, and wildlife sanctuaries.

Have you decided to visit Tashigang for your winter holiday? I am sure you already made up your mind. The unique facts and stories behind these five fascinating places in Tashigang will make your holiday the best one you’ve ever experienced. Start packing some warm clothes because it is going to get a little chilly in Tashigang during winters. Explore around the Eastern jewel of Bhutan and carry the best memories with you because Tashigang will make you miss it when you leave.