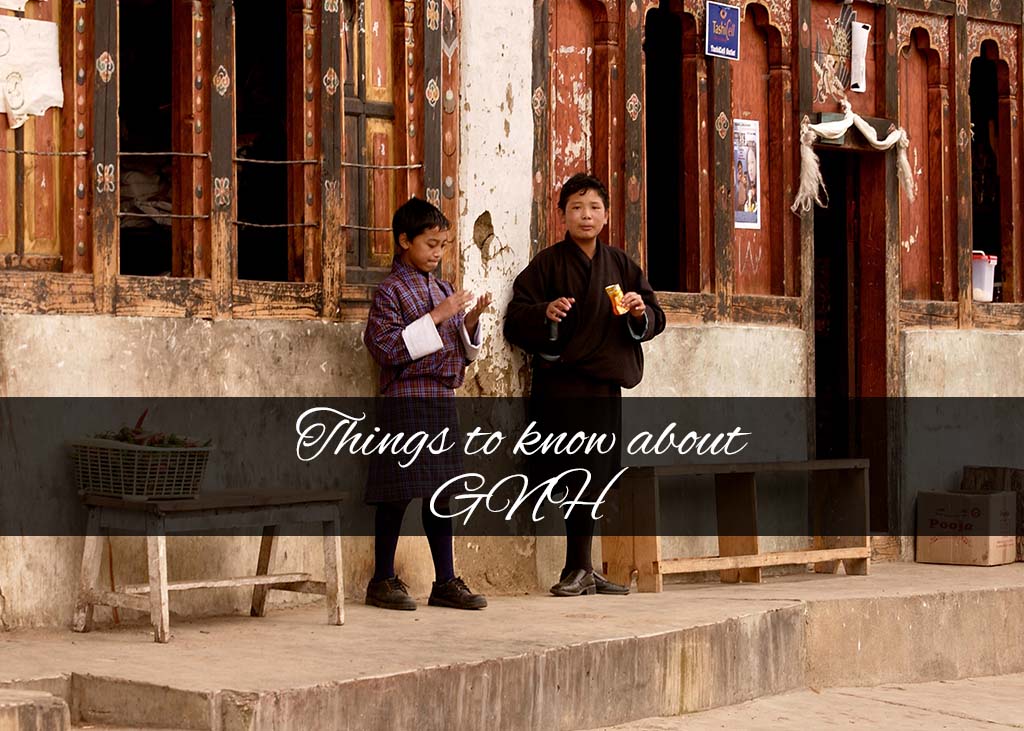 1. The Beginning of the GNH(Gross National Happiness) Era.

Gross National Happiness (GNH) is a development philosophy founded in the 1970’s by the fourth king of Bhutan, Jigme Singye Wangchuck when he said that happiness and wellbeing should be placed over material gains thereby deeming GNH more important than gross domestic product. However, even historically, the idea of happiness as a guiding principle for the government dates back to 1729 where a legal code states that “The purpose of the government is to provide happiness to its people. If it cannot provide happiness, there is no reason for the government to exist.”

As the last standing Mahayana Buddhist nation, GNH also finds its roots in Buddhist concepts and philosophy. Since medieval Bhutan, rulers and leaders have all agreed that government and politics shouldn’t be considered separate from spirituality. Buddhism’s core principles lay in compassion and cultivation of happiness and in this sense, spirituality could also translate to compassion. More broadly, an attitude that takes into account the wellbeing of other sentient beings. It is therefore evident that religion has and continues to play a  central role in guiding decision making, placing spirituality at the heart of governance. The constitution of Bhutan also states that “The State shall strive to create conditions that will enable the true and sustainable development of a good and compassionate society rooted in Buddhist ethos and universal human values.”

approach towards progress, giving importance to emotional happiness and life satisfaction over material and economic aspects of wellbeing. Measuring progress only through GDP limits taking into account and does not value time, leisure, human and social capital, or unpaid work etc. GNH does not aim to provide direct happiness to people. Instead, its aim is to develop conditions through policies and decisions that enable a citizen’s maximum level of wellbeing. When Bhutan became a democracy in 2008, the newly drafted constitution furthered the inclusion of GNH as number one on the state agenda to promote development. The constitution states that, “The State shall strive to promote those conditions that will enable the pursuit of Gross National Happiness.”

“Gross National Happiness measures the quality of a country in a more holistic way and believes that the beneficial development of human society takes place when material and spiritual development occurs side by side to complement and reinforce each other.” – His Majesty Jigme Khesar Namgyel Wangchuck, the Fifth King of Bhutan

development in Bhutan since 1961. Using the results from the GNH surveys, FYPs since 2008 have been framed to promote happiness in Bhutan through targeting changes in ecology, culture, sustainable socio economic development and governance. For local governments as well, GNH checklists are issued for projects, programs and decision making.

This is the only moment in Bhutan.

6. How the Measurement of GNH is done.

The Centre of Bhutan Studies and GNH research released the GNH index in 2011. Within the 9 domains, there are 33 indicators. Each person’s happiness is measured subjectively on a scale of 1-10 for each indicator and identifies 4 groups of people- unhappy, narrowly happy, extensively happy and deeply happy. It is designed in such a way that the method allows for the index to be decomposable by any demographic category i.e. gender, age cohorts etc. A questionnaire based survey is used to decipher the index and it is divided into 20 sections with a total of 148 questions. Surveyors go to individual houses and physically conduct the interview. So far there have been three national GNH surveys including a pilot project in 2006-07 across all 20 districts of the country. The sample size of Bhutanese surveyed has been growing over time.

The most recent GNH survey in 2015 showed that men were relatively happier than women,

Urban residents were happier than rural and more educated people also tended to be happier. The index was also calculated at 0.756, a stark increase from 2010 where it was 0.743. It is evident that policies being placed in consequence to the survey played a role in improving the wellbeing of Bhutanese citizens, Bhutan today is equitable and sustainable despite being a low income nation. The country has constantly been ranked happiest in Asia and also falls into the top category when measured globally. GDP is growing at a rapid rate of 7.5% since the 1980s but cultural identity still remains intact. Additionally, 70% of Bhutan’s land is under forest cover,absorbing more carbon than GHG emissions thereby deeming the country carbon negative.Bhutan also pledged to remain carbon neutral for all time in light of the global climate crisis. Yes,It is evident that Bhutan’s GNH is a major success story.

8. GNH across the world

The world is now familiar with the concept of happiness in Bhutan and GNH. With conferences across the globe on wellbeing taking place and academic research constantly taking place on subjective well being, Bhutan is no longer the only country in the world to discuss the importance of happiness in policy making and governance. The UN observes March 20 th as International Day of Happiness while OECD forums also discuss the importance of wellbeing and happiness instead of economic success.

The Western world is dominated by globalization and notions of wealth and economic success at the cost of loss of culture, tradition, languages and so forth. Meanwhile, this small Himalayan nation has discovered the perfect balance between both after evolving a simple aspiration into a quantifiable tool.

To know more about other interesting travel topics, read our travel diary by clicking the link here – https://www.drukheritage.com/bhutan-diary/page/2/

Click the link to learn about Flora and Fauna in Bhutan.

Happiness is a place