A Sneak Peek into the Kingdom of Happiness 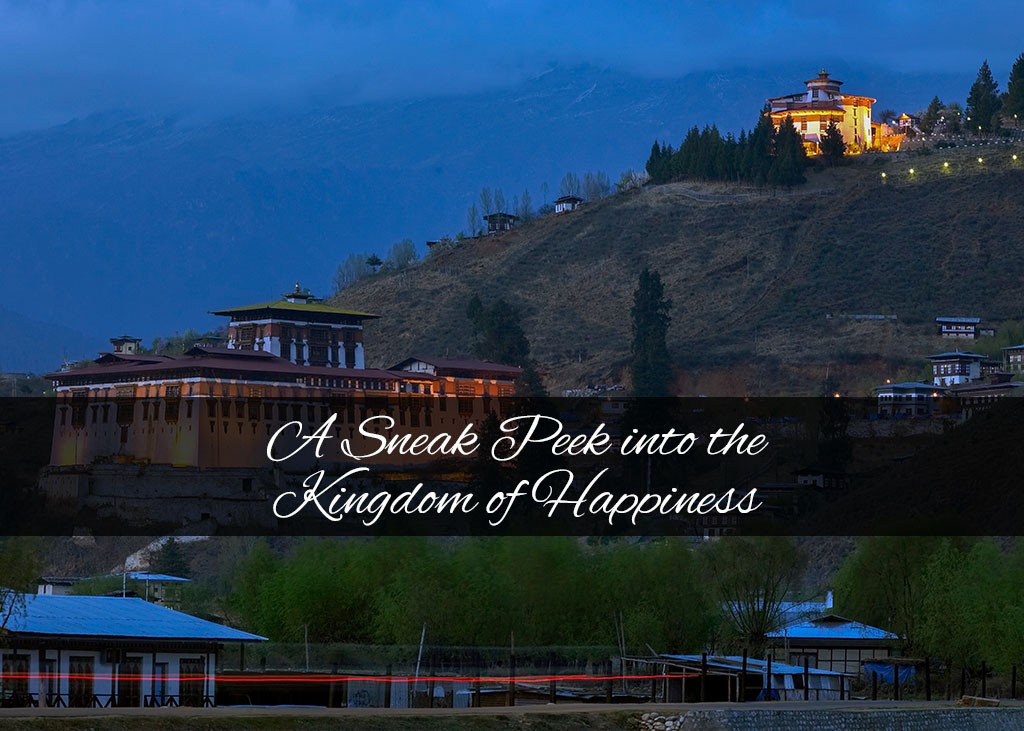 Bhutan, the last Shangri-La, a Buddhist kingdom is known for its high mountains and low valleys. The dramatic landscape of rugged terrains and vast plains, monasteries, and Dzongs (fortresses) are its gems and these makes the stunning country a must visit destination for 2021. Here are some of the sneak peeks of Bhutan’s astonishing places that every visitor won’t leave without setting foot.

By far, Trashi chho dzong is the most impressive building one can find in the capital city of Bhutan. It serves as the official seat of the head of the kingdom. The grand fortress sits on the north of the city by the river bank of Wang Chhu. The Dzong once housed the national assembly and now it serves as the throne room, and monastic body. Originally, the Dzong you see today wasn’t the Thimphu dzong. The place where Dechen phodrng stands presently had a fort built during 1916 calling it as Dho Nyen Dzong meaning the “Blue stone Dzong” representing Thimphu Dzong

Paro Taktshang (Tiger’s nest) is one of the top wish lists of every visitor in Bhutan. The monastery is one of the oldest of the country and most sacred. The monastery is more than 300 years, perched on a cliff 900 meters above Paro valley. The precarious tiger’s nest gets its name as fables have it that Guru rinpochhe once meditated in the caves of Paro taktshang. It is believed that Guru Rinpochhe rode a tigress flying to the cave. Hiking up to the destination normally takes 5-7 hours with a distance of 4 miles round trip. While ascending to the tiger’s nest, beautiful landscape of Paro, the fresh mountain air and the inhibited Grey Langurs are the perks of hiking there.

The colossal statue of Buddha Dordhenma

The first thing that catches every visitor’s eye on entering the capital city of Bhutan is the gigantic statue of Shakyamuni Buddha. It is the tallest sitting statue over a height of 51m tall and is the house of over 125000 small Buddha statues. The commanding statue sits atop a hill of Kuensel Phodrang. The statue is made of bronze and gilded in gold.

The vast valley of Phobjikha houses one of the ancient Buddhist monasteries, Gangtey. It is most commonly known for its vast plain land where the endangered black necked crane inhabits during the winter. Visitors can take day hikes in the pine forest of phobjikha and enjoy the massive view with Bhutanese traditional buildings with beautiful architectures.

The stunning architecture of the fortress of Paro is what makes it worth visiting. The fortress overlooks the valley and is visible from every corners of Paro valley. The Dzong was formerly called Paro Rinchen Pung Dzong and it is now shortened to Paro Rinpung Dzong. It used to be the meeting hall of National Assembly before and now it’s alike most Dzongs sheltering the monastic body and administration offices

Punakha dzong, also known as Pung Thang Dewa Chhenbi Dzong stands on the confluence of two major rivers,” Pho chhu and mo Chhu”. Unlike other district Dzongs, Punakha dzong is more than a monastic body and an administration centre. It is the winter residence of the central monastic body. The majestic structure is considered one of the most beautiful Dzongs in the country. The most beautiful season to visit the Dzong is when the colored Jacaranda trees demonstrate its most beautiful purple blossoms during the spring season. It is the second oldest dzong built by Zhabdrung Ngawang Namgyal, (a historical figure known for unifying Bhutan)

The ancient Ta dzong (watch tower) built in the year 1949 intending to protect the unguarded paro dzong is believed to be in the form of a conch shell. The museum consist of seven floors housing relics discovered by Bhutan’s treasure discovers, stone age tools, illustrations of early history, royal gallery, and most fascinatingly, a stone egg laid by a mule and a ritual dagger.

Bhutan is a green seasoned country where your experience varies depending on the location and time. The most common period tourist visiting the country is during spring and fall season. If you are looking for an awe-inspiring and a life changing experience, Bhutan is a must visit destination.

Want to know more about Bhutan before you visit? Read our blog on the 11 things I wish I knew before going to Bhutan.