11 Things I Wish I Knew Before Going to Bhutan 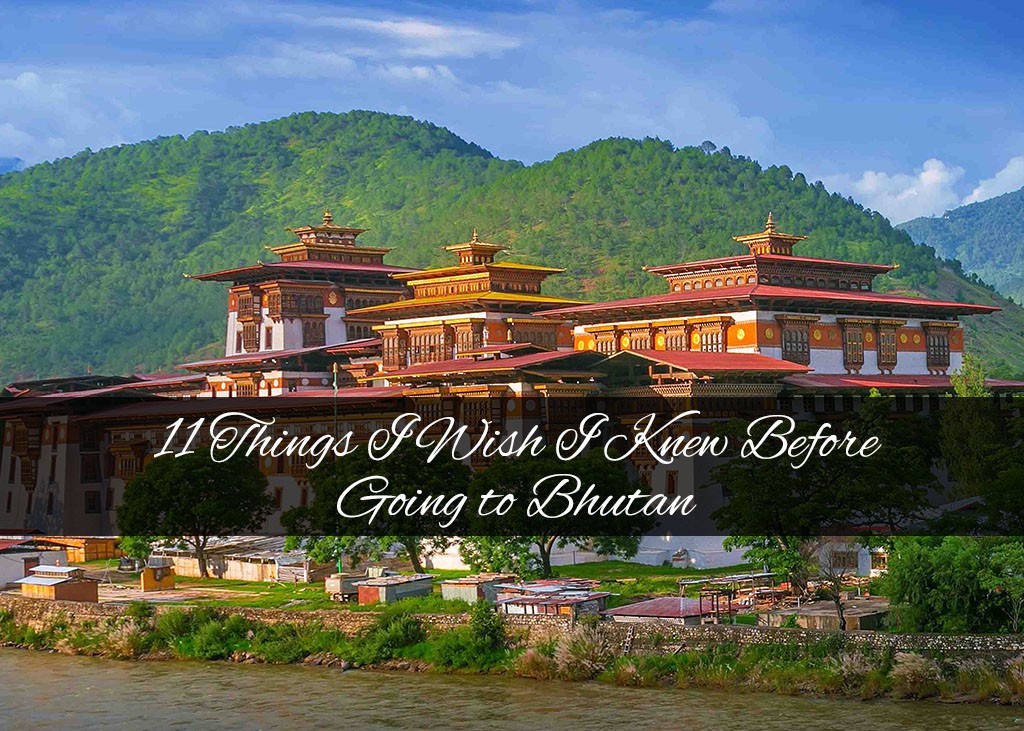 The Tiger’s Nest Monastery in Bhutan

Since Bhutan is a country that has remained isolated and mysterious for all these years, it makes it more captivating to come explore more of a unique culture and travel to Bhutan. It is also known to be the last Shangri-la (“a remote beautiful imaginary place where life approaches perfection : utopia”) left on this earth. Bhutan has maintained a large portion of its unique, ancestral heritage throughout the years. Bhutan is also known as the leading green destination where you can Experience natural wonders first-hand when exploring the beautiful nation.

The Cost of your Holiday

Bhutan is known as an expensive destination due to its $250 fees and Many people are confused because they think Bhutan’s daily tourist fee is a cost on top of other travel costs, but what they don’t realize is that it is basically an all-inclusive trip cost! The package emcompasses the cost of the Visa, Licensed Bhutanese guide, Driver and transportation, Accommodation, Entrance fees, Food and drinks and All taxes within the country. Considering all is included, this price then becomes easily affordable.

2. The friendliest people on earth

Bhutanese people are known to be the friendliest people in the world. They are also often described as trustworthy, honest and simple. This is known to be due to Bhutan’s unique approach to Gross National Happiness. GNH is a guiding philosophy which favors non-economic aspects of development, while still striving for national growth. This is now a permanent manner of life in Bhutan and it aims to improve living standards which would eventually lead to the increase in happiness of a person and so the overall contentment of the country. After visiting Bhutan, people often say that ‘ Happiness is really a Place’.

3. Which season to visit?

Punakha in the Spring

The best time to travel to Bhutan is during the spring months of March to May when the valleys come alive with flowers in bloom. It is also the time of festivities and festivals where you see the people of the country rejoice. The time of clear skies and glimpses to the Himalayan peaks, flourishing Himalayan flora and fauna and simply stunning snowfall.

October to December is also one of the best times to plan your holiday to Bhutan as the air is clear and fresh with sunny skies. In colder months like January and February you are able to experience the gorgeous snowfall of the Himalayas, but from then until April the climate remains dry and pleasant and in late spring the famous rhododendrons bloom spectacularly, flooding the valleys with colour.

The rich cultural diversity of the country reaches its full splendour during festivals, religious celebrations deeply rooted in the inhabitants of the kingdom, which takes place all year round. Known as tsechu these are festivals where you see all Bhutanese dressed in multicolored national dress and truly celebrate their nation.

5. Packing for all kinds of weather

Bhutan is a country of all different kinds of weather from heavy snowfall in the northern regions to humid and hot climates down below. In Southern Bhutan, the climate is tropical in the monsoon season and may range from 15 degree Celsius in winter to 30 degree Celsius in summer. The centre enjoys sub-tropical climate with very cool winters while the northern parts of the country have harsh climate including snowfall.

Monk meditating besides the Punatsangchhu river

Bhutan to this day remains traditional and excels in preserving its culture. In their efforts to guard their rich culture, Bhutan has introduced multiple measures to maintain and emphasize traditions and values which is part of the everyday lives of its citizens. The national dress being the Kira for women and Gho for men, are determined compulsory when at work or school.

GNH can also be considered a method of preserving the culture as instead of GDP, representing wealth and materialism, it focuses on family, friends, traditions, emotions and their values. Through the GNH, they aim to engage in all the benefits of modernization while holding on to their values, culture and traditions.

All houses in Bhutan are decorated traditionally, as by royal decree  even new buildings have to be decorated with traditional carved wood, Bhutanese emblems and mythical creatures.

Bhutan has remained without the influence of the western world for centuries, mainly due to its geographical location and traditions and Americanization is vastly avoided in Bhutan. It is  one of the few countries that does not dispossess global  fast food chain giants such as Mcdonalds, KFC or Starbucks.

An interesting fact remains that while facing development to fit into a modern world, Bhutan tried to install a stoplight in the capital Thimphu but it rested for just 24 hours. It was deemed too modern and was quickly removed to be replaced by policemen who directed the traffic from the middle of the  city’s busiest street.

What most people don’t know before they travel to Bhutan is that it is a  country where you are able to experience luxury at its finest. The country is often regarded as 3rd world or a country closed off to all modernity therefore living standards are considered to be low but Bhutan in fact is one of the countries ranking highest in luxury travel. Numerous well renowned 5 star hotels such as Six Senses, Le meridian, Amankora and Bhutan spirit sanctuary have based themselves in Bhutan.

8. Planning your holiday to Bhutan through a Travel agent

To enter the country it remains compulsory that you come through a travel agent. This is due to the need of regulating the number of tourists that arrive to maintain the country’s world class sustainability.  What people don’t realize is that everything is actually made easier for you since visa, airfare, transportation etc is all inclusive; and you have the freedom to go anywhere you want.

9. The only Carbon negative air

Bhutan has a big carbon-negative reputation to uphold, and even bigger plans for the future. By 2030 Bhutan plans to reach zero net greenhouse gas emissions and to produce zero waste.  Currently it has been confirmed that Bhutan has 71 percent of the country under forest cover and it remains the only country in the world that is carbon negative, which means it produces more oxygen than it consumes. It’s forests absorb three times this amount, which determines Bhutan as a worldwide carbon sink. Bhutan also aims to be the first country growing only organic food and plans for its food production to become 100 percent organic by 2020. Instead of using artificial chemicals, Bhutanese farmers will rely entirely on animal and farm waste for fertilizers.

Nightlife in Bhutan is one that is not explored by everyone since the splendour of this tiny country is overshadowed by its monasteries. What is generally unknown is that Bhutan is a country with a booming nightlife!  After visiting the calm monasteries, you’ve got to visit Thimphu for a hearty dose of Bhutan’s nightlife. Mojo park is a nice pub with a great ambience and live bands. The crowd was a mix of locals and tourists across different age groups. Space 34 is one of Bhutan’s nightclubs in the centre of Thimpu known as the dance hub. The newly opened Blackout rooftop bar remains a local and a tourist’s favourite with a stunning night view of the entire city of Thimphu. Endless places such as the Terton Grey area, Viva city and the Pema hotel’s rooftop bar are crucial to make a visit on your holiday to Bhutan.

Phallus paintings in Bhutan are esoteric symbols, which have their origins in the Chimi Lhakhang monastery near Punakha, the former capital of Bhutan. Traditionally symbols of the penis in Bhutan have been intended to drive away the evil eye and malicious gossip. The phallus is a symbol of power and fertility as well as male sexuality. It is also a symbol of life, death, and rebirth.

Bhutan remains one of the most unique countries in the world and is described as, “A land where magic and myths are all part of culture and history; a place where more monks are found rather than soldiers, and the birthplace of the ideology of Gross National Happiness”.

Now that you know all that you have to before visiting this unique kingdom PLAN YOUR HOLIDAY TO BHUTAN NOW!