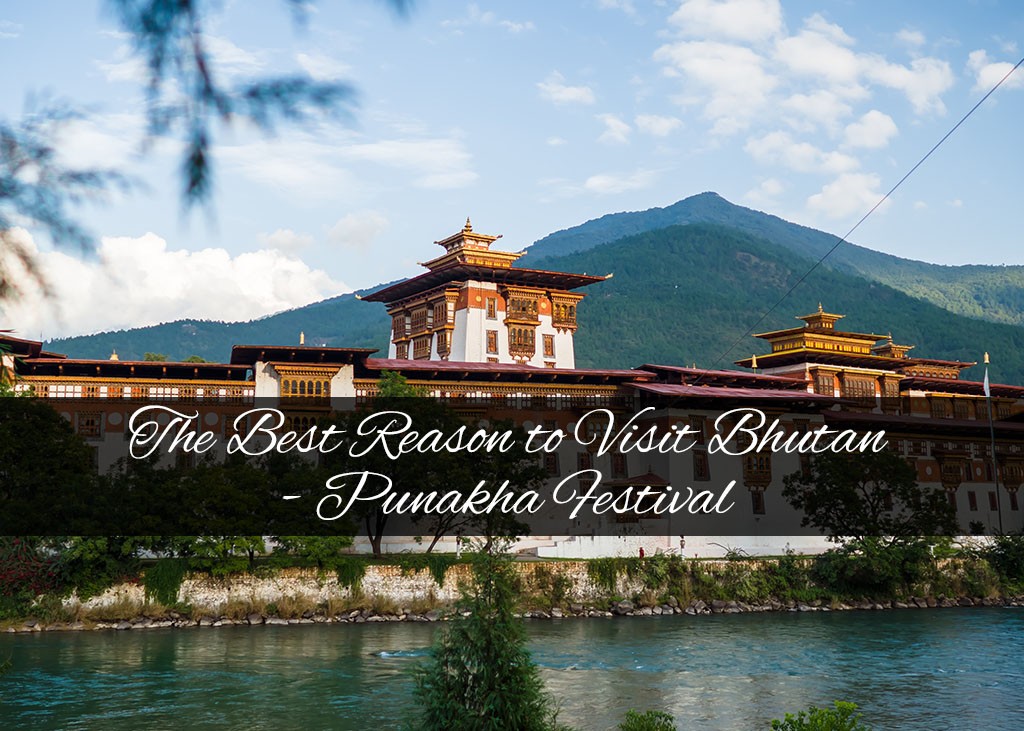 Bhutan – The Kingdom of Happiness

Bhutan, the Land of Thunder Dragon with a population of merely 8 Lakhs is still one of the least unexplored countries in the world. Closeness to the pristine mountains, stunning environment, breath-taking blue rivers, and sacred monuments are the gems of the country. Bhutan is  famous for the Gross National Happiness, the Last Shangrila, enchanting environment, and conservation of biodiversity. The country opened its door to the outside world in 1974 and gradually sees escalating numbers of tourists visiting every year.

There are numerous exciting and enchanting places in the country but among that for your Bhutan trip 2021, the Punakha festival is the must-visit for memorial moments.

The Speciality of Punakha Festival

The most significant religious events of the country

Paro Dzong – The Fortress of Happiness

The term ‘Festival’ or ‘Tsechu’ is a sacred religious event that is celebrated on the 10th day of the Bhutanese calendar. Punakha festival is held in Punakha Dzong/fortress, the most beautiful dzong in the country.

Punakha Dzong, the fortress of happiness is suited between the Pho Chu (Male River) and Mochu (female river). It houses the sacred religious volumes of prayers, stories, and monuments. The fortress is beautifully surrounded by lilac and jacaranda trees during spring, making it the most beautiful and greatest dzong in the country.

Punakha Dzong is the second capital place of Bhutan where the high monastic bodies and scholars dwell during the winter months. The fortress is intricate with exquisite paintings of Buddhist masters and yogis.

Before visiting the fortress you will come across Bazam (bridge) that was built in the 7th century and was renovated in 2008.

The courtyard of Punakha Dzong

Punakha dzong is one of the scared dzongs in the country. The fortress holds the most mystical histories were in early 1326, a popular yogi master Guru Padmasambhava (Guru Rinpoche) foretold the location of the construction of the fortress. In 1637, Zhabdrung Ngawang Namgyel ( the great saint) began to construct the dzong to protect the country from Tibetan invasion as prophesied by Guru Rinpoche.

During that time, the dzong is known to be the political center until 1955. It is believed that the huge dzong was constructed without nails.

Punakha Dzong has also served as the coronation place of the first and second king of Bhutan.   The first National Assembly was hosted in the dzong with numerous displays of thangkas and festivals.

Punakha Festival is celebrated on the 10th day of the Bhutanese calendar. The date denotes the birth anniversary of Guru Rinpoche, Padmasambhava. He was a great philosopher, yogi, saint, and Buddhist master in the 8th century.  It is the most significant religious ceremony in the country.

Mask dance or Chham is the most significant to all the Bhutanese people culturally. It is performed in all festivals throughout the country and you can audience it in Punakha festival too. Mask dances signify the history, after-death, place, and culture of Bhutan. It is one of the sources to deliver religious messages to people and most importantly it is performed to ward off misfortunes and evils by invoking deities.

Mask dances are the epitome of victory, spirituality, and peace in the country.  It was introduced by Guru Rinpoche and later re-created by Tertoen Pema Lingpa (treasure discoverer) and Zhabdrung Ngawang Namgyel (the founder of Bhutan). Don’t miss your lifetime opportunity to witness the scared masks dances during your Bhutan tour.

Step on to the Land of Thunder Dragon- Paro valley

You will land in the most beautiful valley, Paro. After clearing all the immigration formalities your tour guide will welcome you to the land of the thunder dragon.  The tour guide will check in exquisite hotels for you. After resting, you will be guided to;

Tashichho Dzong is known as the fortress of glorious religion and it was built in 1641 by the great saint Zhabdrung Ngawang Namgyel.  It houses the throne room, office of the king, secretariat, and central monk bodies.

Memorial Chhorten based in the Thimphu core city

It is the most memorial shrine built to dedicate the Third King of Bhutan, Jigme Dorji Wangchuck, for his unwavering leadership.

You will be routed early morning after taking the breakfast. These will be the Bhutan trip day 2 exciting list;

The market displays the different traditional handicrafts of Bhutanese craftsmen and artisans. You will get to know the classic Bhutanese traditions like; thangkas, masks, jewelry, and many more.

You will take a short visit to the Bhutan Post Office that is situated in the core of Thimphu city. It houses the different stamps of Bhutan and the historic roadmaps of the evolution of stamps in the country.

Takin – the endangered species of the country

Takin is the national animal of Bhutan and is one of the most preserved animal parks. Takin holds historic stories in the country.

The Valley of Punakha, the place of beautiful sceneries

Early morning after your breakfast, you will be directly routed to Punakha, the most stunning valley in the country.  It has a distance of about 85 km that takes around 2 and half hours to reach the destination.

You will come across the Dochu La Pass which consists of 108 small stupas. From that pass, you will the gigantic mountain, Mt. Jomolhari. On reaching Punakha valley, you will be directed to visit Chhimi Lhakhang, Devine Madman’s monastery. It is also known as the fertility shrine where a married couple receives the blessing of fertility.

The last day of Punakha Drubchen showcases the most historic battles of Tibetan. It is annually held in the courtyard of Punakha Dzong.  You will notice the beautiful scenery of dzong that is located between the two major rivers Pho Chu and Mochu.

Punakha Tshechu – The religious events of the country

You will spend the whole day exploring the Punakha Tshechu along with Paro valley towns.

Phojikha is known as the place for the rarest bird species, the Black Necked Crane. This place is perfect for birding activities as it holds a variety of bird species. It has the most amazing vistas, environment, and fresh plains. You will enjoy the farm place by experiencing their lifestyles and cuisines.

The High view of Paro Valley

Paro valley is one of the most visited and popular places among tourists. On arrival, you will be guided to visit;

The Dzong is commonly known as the fortress on a heap  of jewels. It was constructed in the 16th century and is surrounded by whitish walls, shrines, and small temples.  It serves the festival processions and houses to the monastic bodies and government offices.

It is one of the sacred monasteries of the country where it is precariously built on the cliffside, overlooking the beautiful valley of Paro. It holds the most religious history of the country. You will come across the beautiful sceneries and spots to give your mind a short relaxation. It is the most popular travel destination for all tourists visiting the country.

In the morning, the tour guide will see you off at the Paro International Airport.

Bhutan, the Last Shangrila, is one of the most popular travel destinations in the world. Visit Bhutan to experience the one-time opportunity to explore the unexploited country. Register through Druk Heritage Tours and receive unique personal benefits for Bhutan tours on Punakha Festival. There are lots of exciting Bhutan tour packages that will be designed for you.