The best reason to visit Bhutan – Punakha Festival and Events 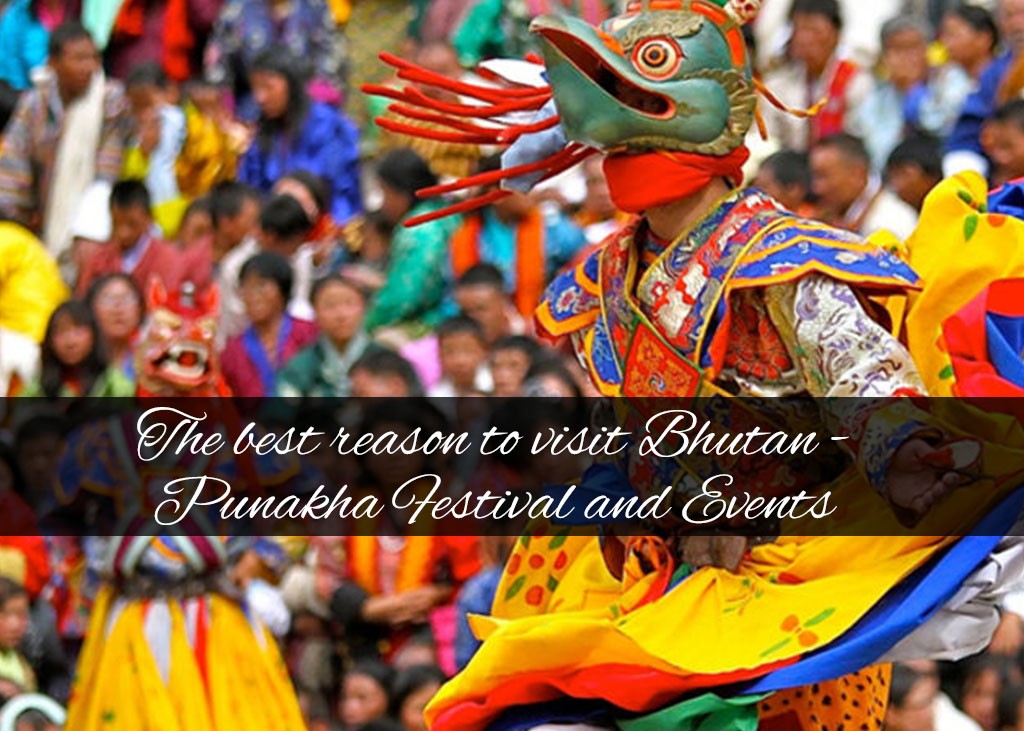 The best reason to visit Bhutan – Punakha Festival and Events

Visit the Majestic Land Of the Thunder Dragon

Planning for a Bhutan trip? What to Know about Bhutan travel? Need a Guide for a Bhutan tour? Don’t worry this blog will help you with all of these. Bhutan is a majestic country. It never ceases to amaze anyone with its breathtaking landscapes of rolling hills, lush greenery, and fascinating history mesmerizing charm. There are magnificent fortresses that still exist across the country, which are uniquely constructed with traditional Bhutanese woodwork and intricate art. Bhutan is famous for its development philosophy based on GNH (Gross National Happiness), which measures the quality of life based on the spiritual and mental well-being of the people. Bhutan is also known for celebrating some of the most vibrant and majestic festivals in the world, passed down by generations. Bhutan festivals include joyous century-old rituals and festivals which are marked by masked dances and many other exciting events.

The country has now become one of the most popular tourist destinations, tourism development is guided by the principle of ‘High value, low volume’. This principle seeks to ensure that the guests are provided with the best meaningful experience, and educate them about the Bhutanese culture and values, but at the same time protect the environment and preserve its unique culture and tradition. In recent years there has been the inception of many Bhutan tour and travel agencies and has helped provide the people with a lot of job opportunities, so the tourism sector is known to be one of the backbones of the country’s economy.

Among the best tourist places, Punakha is one of the most popular places to visit. It is one of the 20 districts of Bhutan and the administrative center of Punakha Dzongkhag. The beautiful valley of Punakha is surrounded by gardens and rice fields, most of the village houses are built with pounded mud and stone foundations. Punakha also has one of the most beautiful Dzong in the country, which was constructed in the year 1637 and is surrounded by two of the most prominent rivers- Pho Chhu and Mo Chhu, and is seen as a symbol of the country’s unity. The Dzong also holds the most sacred relics- the Rangjung Kasarpani, and the sacred remains of Zhabdrung Ngawang Namgyal and Terton Padma Lingpa.

The fortress looks exceptionally beautiful in Spring, surrounded by Jacaranda trees. Inside the Dzong lies detailed and colorful murals painted on the walls that provide an insight into the history and beliefs of Buddhism in Bhutan.

The Punakha Dromchoe and Tshechu are two of the biggest festivals in Bhutan, which take place every year in February or March inside the Punakha Dzong. The Punakha Dromchoe/ Drubchen is a three-day festival dedicated to the deity Yeshe Goenpo and features costumed warriors and ritual dances. It is the re-enactment of a 17th-century battle scene when a Tibetan army invaded Bhutan to seize its most precious relic- the Rangjung Kharsapani, which is a self-created image of Chenresig.

The Punakha Tshechu follows right after the Dromchoe, making it a week-long celebration of a spectacular festival. The three-day Punakha Tshechu is marked by chams (masked dances) and giant offerings to Guru Rinpoche and other local deities. The chams illustrate many incidents from the life of the great Buddhist saint and teacher. The local villagers also join the celebration, singing and dancing to their local tradition. On the final day of the event a thondrol (a large religious painting), depicting an image of Zhabdrung is put on display. It is believed that witnessing the masked dance and the throndrol will wash away your sins. The throndrol can be seen by dawn and is rolled up by sunrise, and will be displayed only on the next Tshechu.

Other places to visit while in Punakha

Experience the Beauty of the Khamsum Yulley Namygal Chorten

Overlooking the scenic Punakha valley lies the very famous tourist attraction site – Khamsum Yulley Namgyal Chorten, built in 2004 and commissioned by the Queen Mother. The temple was built to safeguard the valley of Punakha from all evil or negative forces and to bring peace and harmony.

Standing pleasant on a scenic hill, Chimi Lhakhang is considered to be one of the most important places to visit in Punakha. Legend has it that the Lhakhang is built on a rock where the famous Drukpa Kunley defeated a demon and trapped it inside the rock. The monastery is well known for getting a lot of new mothers to get names for their newborn children. There are also many ancient religious artifacts put on display.

The Sangchhen Dorji Lhuendrup Lhakhang is another famous tourist site in Punakha. The temple resembles much to Nepal’s Boudhanath Stupa. The 14 feet bronze statue of Avalokiteshvara serves as the main attraction.

Bhutan is now becoming one of the most visited tourist destinations and there is no surprise why. The country is modern yet still focuses on preserving and maintaining its cultural and traditional practices. This is the reason why Bhutan is set as an example of being the happiest country in the world.

What to know more about when and where to visit Bhutan? Follow us on our social site:

Want to experience how it feels, and do you want to know why most people visit Bhutan? Click the link to find out the best reason to visit Bhutan-Gangtey Festival.