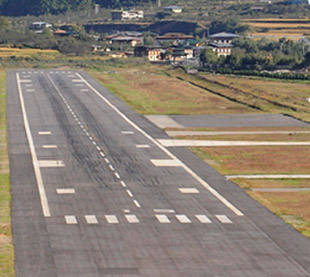 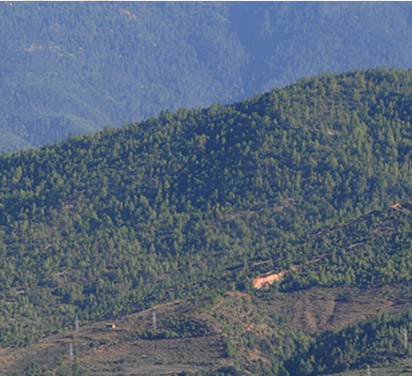 When you arrive at Paro International Airport, your friendly tour guide will greet you just outside the arrival hall.

The effect of the high elevations and the fresh air will likely be the first thing you notice at 7,333 feet above sea level, so we’ll allow you some time to adapt today while we travel to Thimphu and check into your accommodation.


Thimphu, Bhutan’s capital, is the ideal spot to transition from your current way of life to our unique country, which is unlike any other on the planet. As you see monks clothed in traditional red robes, men in striped ghos, and women in brilliantly colored kiras, you will begin to appreciate our local customs.

We’ll start unraveling the mysteries of Bhutan by touring Thimphu’s most prominent landmarks after you’ve settled into your accommodation.

A chorten is a stupa, or hemispheric building, utilized as a meditation space. The whitewashed structure with the golden finial on top is a popular place for prayer since it depicts our beloved third king’s power and benevolence.

It is the present seat of the Druk Desi, the leader of the civil government, and houses the current king’s offices, which are located alongside the Wang Chhu (river). 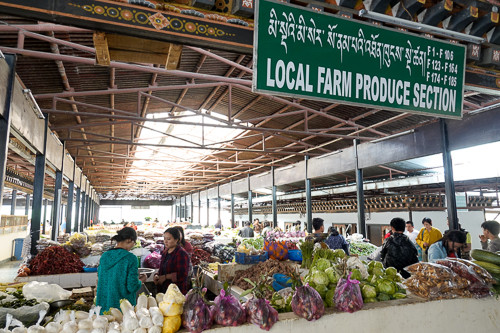 Farmers sell their veggies, cheeses, grains, and the occasional yak leg at the Centenary Farmers’ Market on Fridays, Saturdays and Sundays.

The Kundeyling Baazam is across the street, where you may haggle for local handicrafts like mala beads and prayer wheels.

Then we’ll drive up to Buddha Point in Kuensel phodrang Nature Park to see the 169-foot-tall bronze statue of the seated Buddha Dordenma.

It is one of the world’s largest seated Buddha sculptures, and it rests atop a hill with panoramic views of the valley and surrounding mountains. 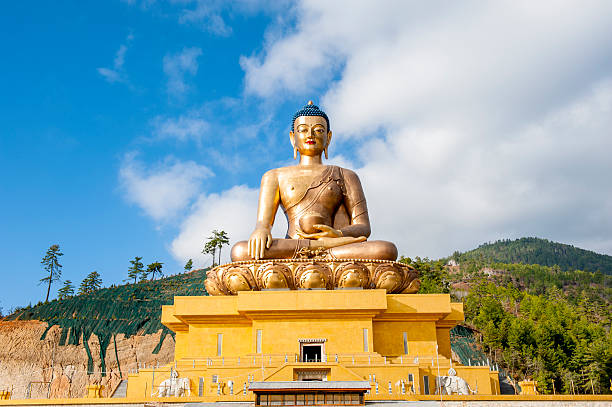 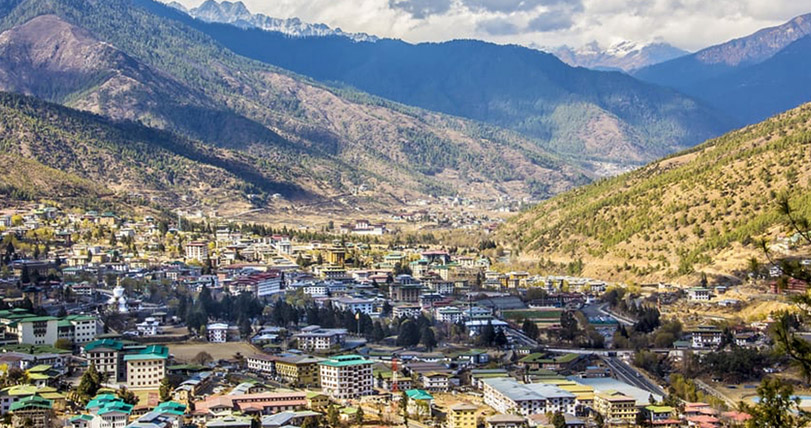 Sangaygang (BBS Tower) – A 15-minute drive from the city center will take you to a hilltop where the Bhutan Broadcasting Tower is located. From here, you may take in the breathtaking view of Thimphu City.

You can spot Takin, Bhutan’s national animal, on your journey up or down from the hillside. It is also possible to request a stroll up to this viewpoint in the early morning.

Dechen Phodrang – Head to Dechenphodrang. Dechen Phodrang, the site of Thimphu’s original Trashi Chhoe Dzong, is located at the end of Gaden Lam.

It has housed the state monastic school since 1971, and a long procession of monks passes between here and the dzong on a regular basis. An eight-year course is taught by a group of 15 teachers to more than 450 students.

Simply Bhutan is a living museum and picture studio whose purpose is to engage and inspire young entrepreneurs by preserving, promoting, and presenting Bhutanese history and cultural variety.

Walk into the very first dzong, established in 1627 by Shabdrung Ngawang Namgyal, five miles from Thimphu on a towering ridge – Simtokha Dzong.

This is where the Institute for Language and Cultural Studies is now. Enthrall yourself with the most notable artistic element behind the prayer wheels in the courtyard, which consists of over 300 well wrought slate carvings. 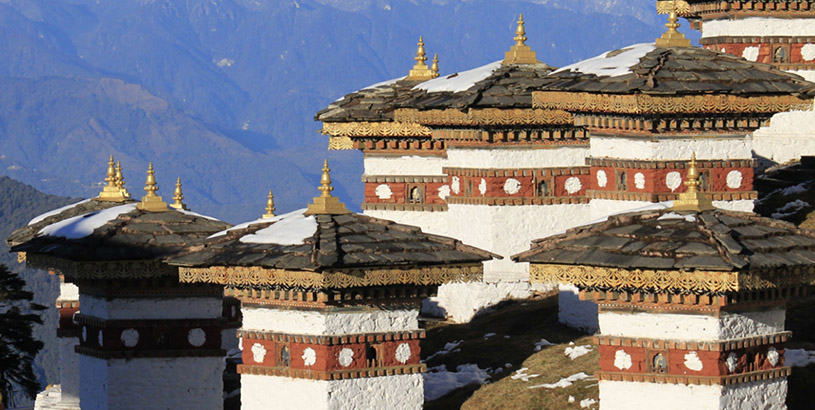 Today we head to Punakha, Bhutan’s former capital until 1955, with a stop at Dochula Pass in between. This well-known tourist attraction offers breathtaking 360-degree views of the Himalayas.

The 108 Druk Wangyal Chortens, which were built on a tiny hill to commemorate Bhutanese soldiers slain in a 2003 battle with Assamese militants from India, are also located here.

The Druk Wangyal Lhakhang temple was finished in 2008 to honor the 100th anniversary of the monarchy and His Majesty Jigme Singye Wangchuck, the fourth king and leader of the raid that expelled the Indian insurgents.

Punakha Dzong, one of Bhutan’s most stunning sites, will be our first stop upon arrival. It is a spectacular example of Bhutanese architecture, situated at the confluence of two rivers.

Punakha Dzong – Built in 1637 by Zhabdrung Ngawang Namgyal to serve as the religious and administrative capital of the region, the Dzong is ideally located at the confluence of the Pho Chu and Mo Chu rivers. 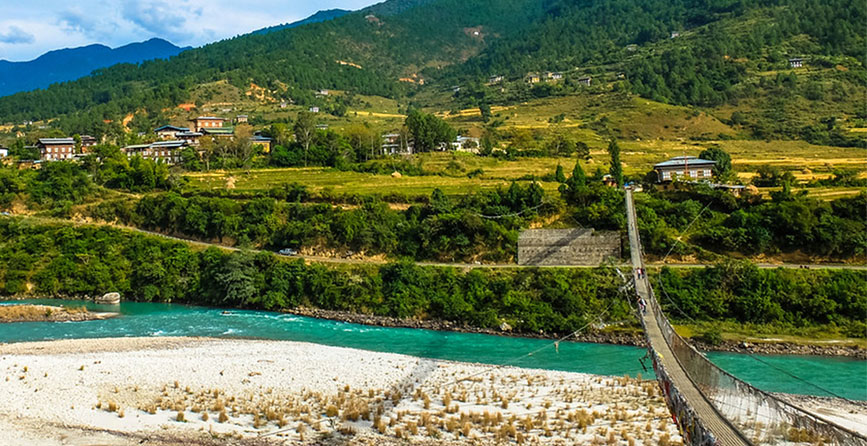 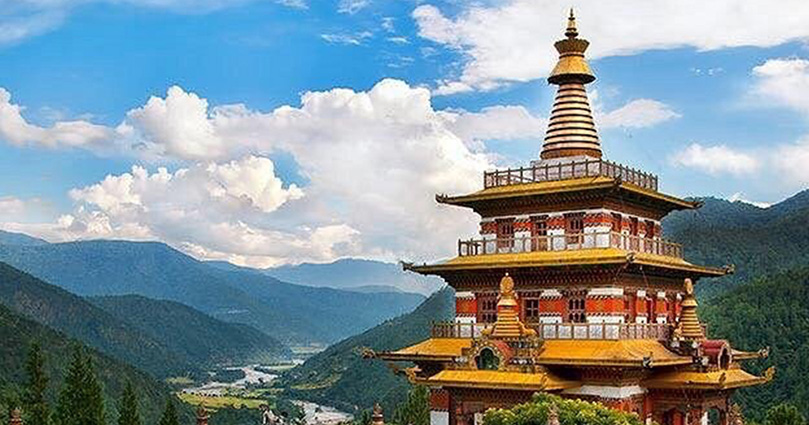 No other temple in Bhutan is as ornately constructed as the Khamsum Yuley Temple. The Queen Mother of the 5th King erected this beautiful temple in order to bring universal peace to the world. On the inside walls are painted the best spiritual art works.

Paintings depicting Buddhist instructors and country tutelary deities can also be found. This is an excellent temple to visit if you want to learn about the symbolic significance of the murals and sculptures. 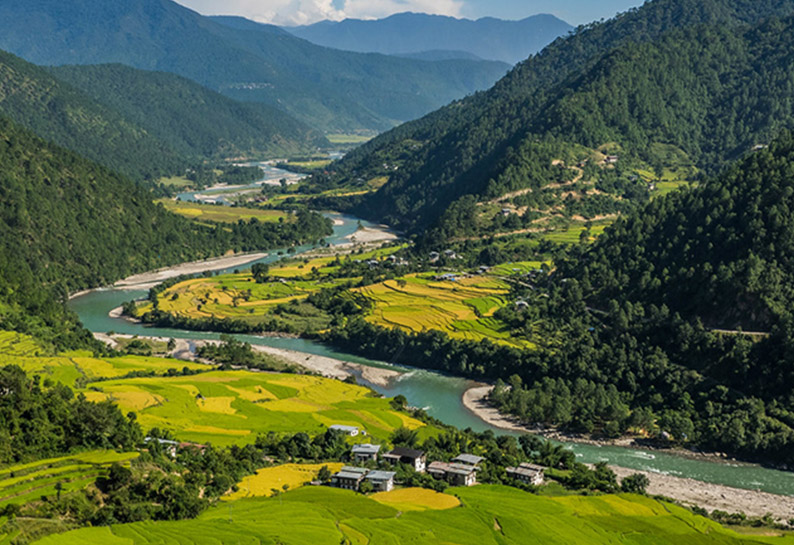 Picnic on the riverbank 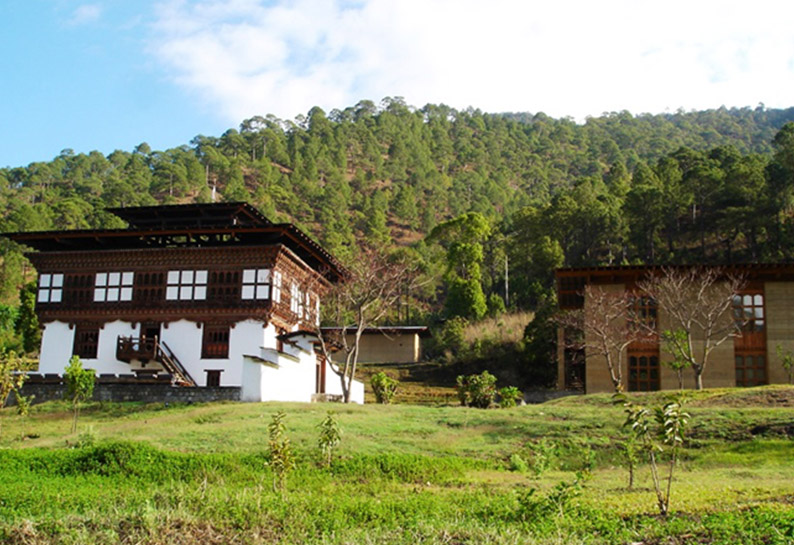 Visit a Bhutanese family at their home and enjoy dinner with them while conversing.

Take a look into their lives and dine in a traditional Bhutanese home surrounded by the family’s warm welcome. 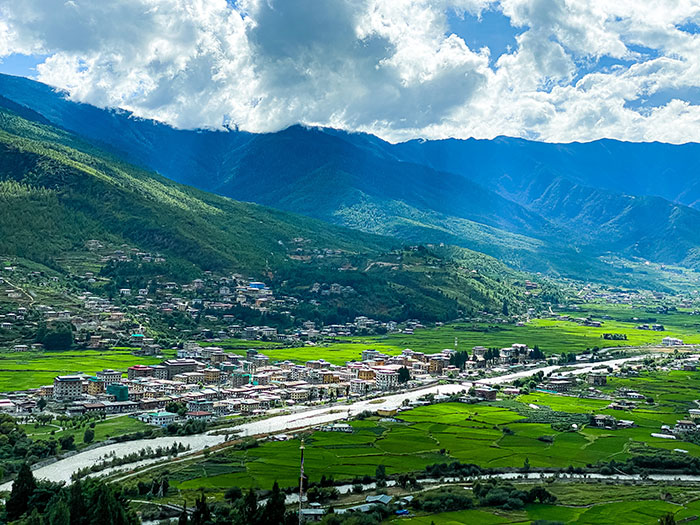 Many of Bhutan’s historic monasteries and temples may be found in the lovely Paro valley. Paro is home to the country’s only airport.

Mount Jomolhari (7,300m) is located near the valley’s northern end, and its glacier water forms the Pa Chhu, which flows through the valley.

The oldest temple in Bhutan is Kyichu Lhakhang, also known as Kyerchu temple or Lho Kyerchu. It is one of the 108 temples established by Tibetan King Songtsen Gampo to conquer and pin down an ogress who was hindering the development of Buddhism, similar to Jambhay Lhakhang in Bumthang. All 108 temples were supposedly built in a single night, according to mythology.

Visit the seventh-century Kyichu temple to travel through time and history. The temple is a wellspring of serenity, as its name implies, and you will feel at ease here. A residence devoted to the late Dilgo Khyentse Rinpoche has been turned into a museum next to the temple. Photographs and other items belonging to Rinpoche can be found. 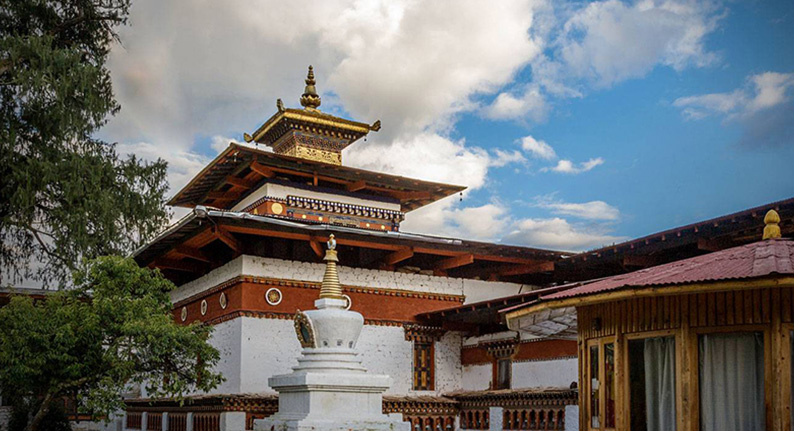 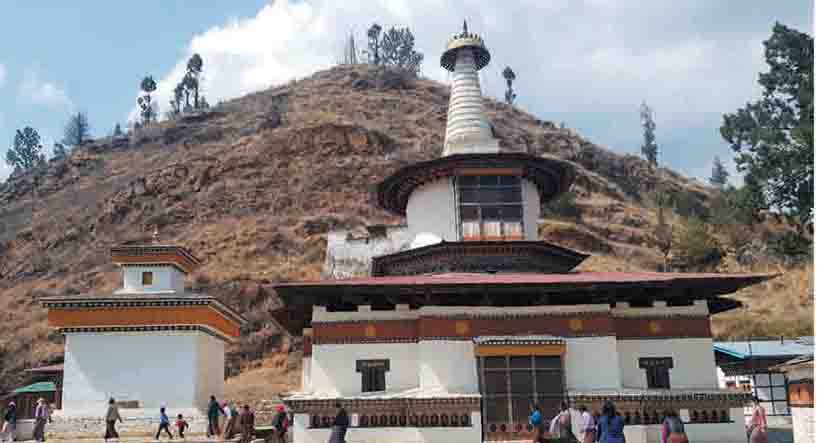 Dungtse Lhakhang – Designed in 1433 by Thangton Gyalpo, the iron bridge builder, the temple was built to conquer a demon and was so firmly shackled to the earth.

You will be all set. Today, we’ll be hiking up to one of Bhutan’s most famous landmarks! Taktsang Monastery, also known as Tiger’s Nest. Taktsang Monastery, also known as the Tiger’s Nest because of its location on the cliffs, has awed many visitors. One traveler notes, “A trip to Bhutan is never complete without ascending to Taktsang.” It’s true since the path there brings you spiritual happiness.

The impressive, elegantly crafted monument becomes a hiker’s delight for those who do not choose the spiritual side. Visit this Buddhist relic that hangs from a cliff in a spectacular setting. Ascend more than two thousand feet from the valley bottom to experience the uphill climb. On the cliff side of Paro Valley, a significant Himalayan Buddhist sacred location and temple complex.

Guru Rinpoche is said to have flown here from Tibet on the back of a Tigress (his consort Yeshey Tshogyal) and meditated in one of the caves, according to mythology. Guru Rinpoche meditated and manifested in eight forms, and the location became holy, earning the name Tiger’s Nest. 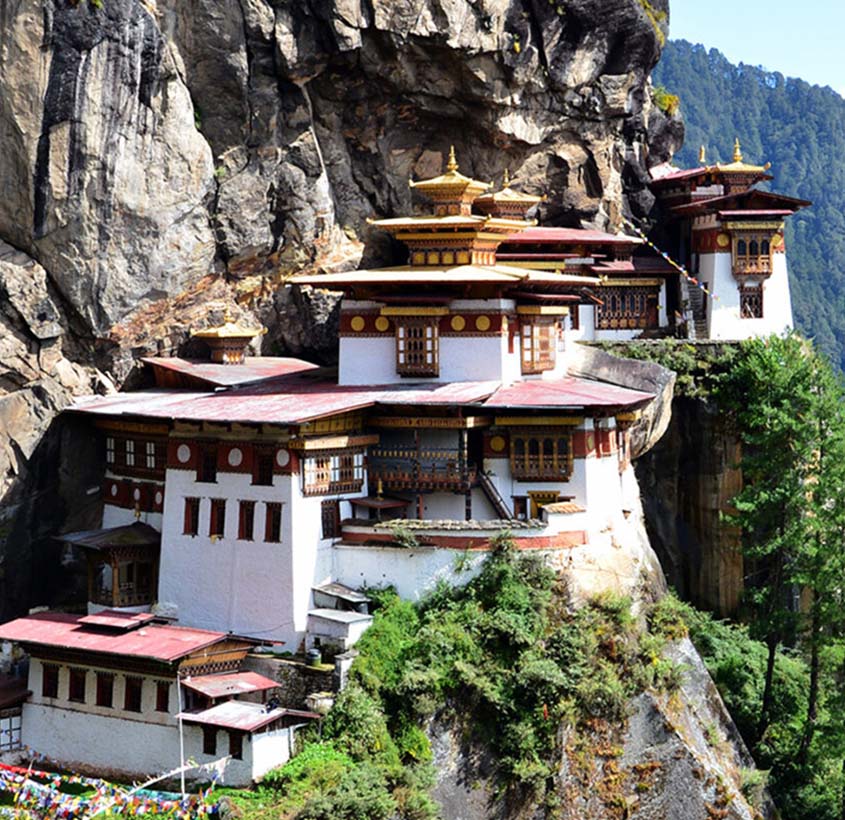 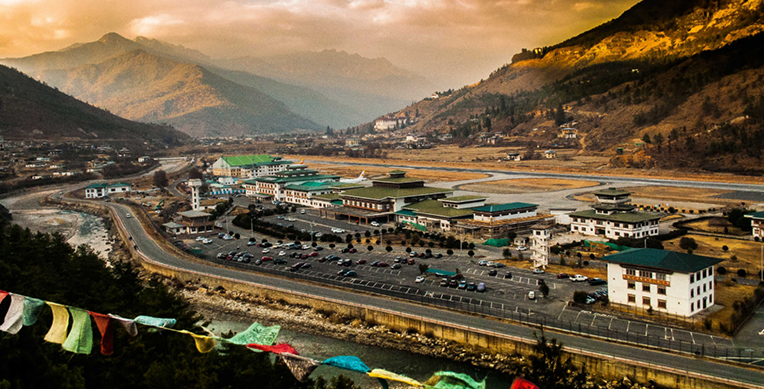 We will bid this magnificent Himalayan land farewell today. We hope you’ve made some friends and have many images and wonderful memories of Bhutan by now! And we hope to see you again soon in this lovely world of countless enchantments! Tashi Delek.

Visa acceptance is guaranteed. In terms of Visa issuing, we have yet to disappoint any of our travelers. Prior to your arrival, your hotel selection will be confirmed for inspection. We only book you into hotels that you enjoy and would return to.

If you are not satisfied with our choices, we will gladly alter your guide, driver, or vehicle during the first two days of your arrival in Thimphu. Our hospitality team is there to assist you 24×7.