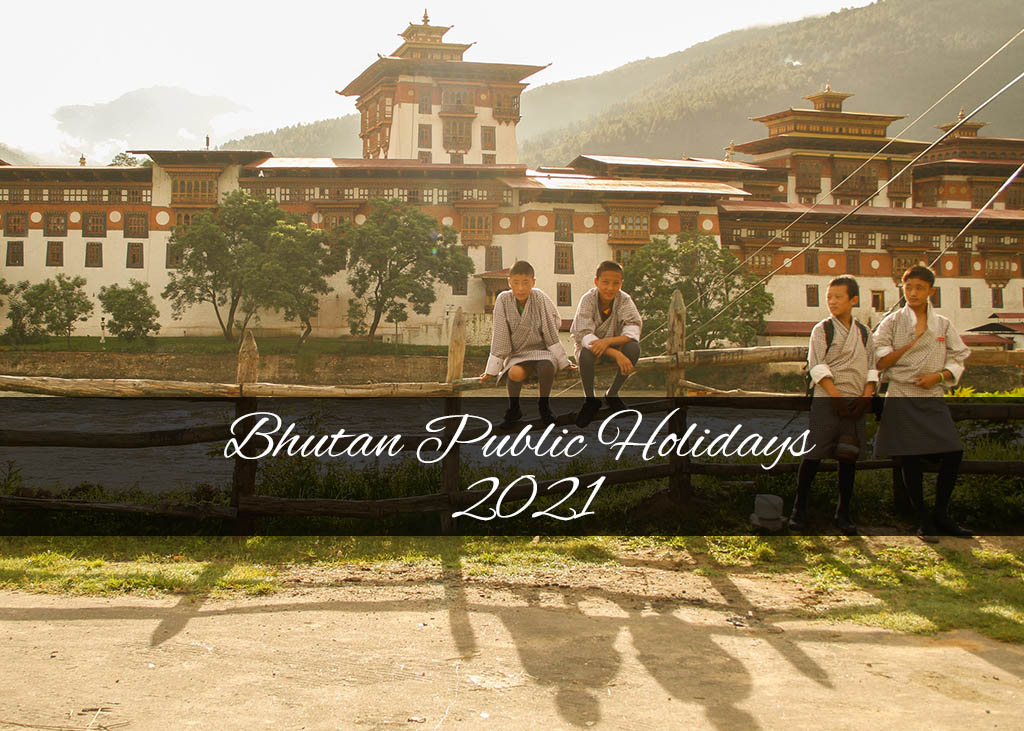 Bhutanese public holidays are the time of year when people plan to spend time with their families and friends. The time of year when Bhutan Holidays are announced is the 2021 holiday list. Everyone in Bhutan looks forward to the holidays, whether it is children, office workers, parents, school teachers, or daily workers. Bhutan holidays include all official, bank, federal, and other Bhutanese ceremonies that are held throughout the continent. Bhutanese people are known to be globetrotters who enjoy traveling, exploring, and experiencing all the fun and excitement that life has to offer with energy and enthusiasm.

Bhutan Public Holidays are days that are observed as national holidays in Bhutan, as well as days with cultural and traditional significance. New Year’s Day, Christmas, Memorial Day, Independence Day, and many other public holidays are included in the list of Bhutan public holidays. All of these days have historical and cultural significance, so they are commemorated in schools, colleges, and institutions with special themes. As a result, students have a lot to learn during the holidays.

The Bhutan holidays  for the year 2021 can be viewed by anyone. Furthermore, if you had something special in mind or if you have a special place in your mind that you have wanted to visit for a long time, there is no better time than now to do so. In other words, you can begin making plans for the year 2021 now that the list of Bhutan holidays are available to view on the website or to purchase in printed form from any online or physical store.

The people of Wang-Tsho-Chen-Gey, in particular, celebrate Nyilo, or the Winter Solstice, as New Year. It is thought to have originated in Wang, which is now Thimphu. According to the Bhutanese calendar based on Buddhist astrology, Nyilo is the first and shortest day of winter, following which the days begin to grow longer until the Summer Solstice.

The Traditional Day of Offering (Dzongkha: bulelwa phuawei nyim), also known as Chunipa Losar, is a public holiday in Bhutan that falls on the first day of the last month of the Bhutanese lunar calendar. This year’s date is January 14, 2021. Bhutan was created by Zhabdrung Ngawang Namgyal, a Tibetan Buddhist teacher, in the 17th century.

On this day, which was commemorated as the New Year in eastern Bhutan at the time, representatives from all around Bhutan would arrive with offerings to Zhabdrung at Punakha Dzong (the old capital of Bhutan) to express their thanks for reuniting the kingdom.

The buelwa offerings were made as a show of love, devotion, allegiance, and reverence for the Zhabdrung.

This New Year is followed by Losar, the Tibetan New Year, which is the most important event in the Tibetan calendar and is honored by many days of public holidays, on the next new moon.

In Bhutan, the New Year is a time for family reunions as well as the strengthening of traditional rites and bonds. It all began in the 17th century, when people from all across the country gathered to celebrate the completion of the Punakha Dzong. The Losar New Year celebrations begin on “Nyi Shu Gu” (Losar New Year’s Eve) and last for two weeks in some parts of Bhutan. The largest celebrations, however, take place over the first three days of the New Year.

Depending on the lunar calendar, the Bhutanese New Year—Losar—is celebrated either in February or March. Some localities may even choose dates that are slightly different from the rest of the country. The festival includes activities such as cooking special delicacies, visiting shrines and temples, cleaning dwellings of unwanted items, and, of course, dancing and singing.

Losar is an ideal time to sample Bhutan’s numerous national cuisines. Red rice, stews, and chili peppers are common dishes. Fried biscuits, diced sugar cane, and fruit are on the dessert menu. Green bananas and sugarcane should be present on a New Year’s table, according to custom, as they offer good fortune for the following year.

While he is the reigning king, the King’s birthday is commemorated for three days. Throughout the kingdom, there are numerous festivals and parades. Because citizens are required to wear traditional attire every day by the government, there aren’t many differences in dress styles throughout the festival.

Because Buddhism is the most widely practiced religion, many ceremonies are dominated by it. Many residents consume ema datse, a chili pepper and cheese stew, as well as chang, a local beer, or arra, a distilled alcohol. Flags are flown in honor of the king in various places, wishing him a long life, good health, and the success of the kingdom. As the kingdom celebrates, all government offices are closed for three days and all government personnel are required to attend official celebration rituals.

This day observes the death anniversary of Zhabdrung Ngawang Namgyal, the warrior statesman monk, who founded the Bhutanese nation state in the 17th century. Zhabdrung Kuchoe falls on the tenth day of the third month of the Bhutanese calendar.

The third King of Bhutan, Jigme Dorji Wangchuck, regarded as the father of modern Bhutan. He opened up Bhutan to modern development and took the first steps towards democratization with major social and political reforms. It is also celebrated as Teachers’ Day because it was the Third Druk Gyalpo who began the modernisation of the country and established a modern educational system.

The celebration of Lord Buddha’s conception, birth, subjugation of evil, attainment of enlightenment, and departure from the human body is known as Duechhen Ngazom and is commemorated all around the Buddhist world. Suddhodana, King of the Sakhyas, and Maya gave birth to Lord Buddha in Lumbini in 560 B.C. At 480 B.C., he died in Kusinagara, India, at the age of 80. In the Bhutanese calendar, Parinirvana occurs on the 15th day of the fourth month.

On this day, prayers and butter lamps are offered at temples and monasteries around Bhutan to honor the birth anniversary of Guru Rinpoche, also known as Padmasambhava (lotus born), who brought Buddhism to Bhutan in the 8th century. Guru Rinpoche is linked to Paro Taktshang, where he spent three months meditating. One of the holiest Buddhist locations in the western Himalayas is Taktshang.

The day commemorates Lord Buddha’s first preaching at Deer Park in Sarnath, India, and is one of the most important days in the Buddhist calendar. The First Turning of the Wheel of Dharma occurred on this day, when Buddha talked to five monks for the first time about the doctrine of the Four Noble Truths (dharmachakra). The day is known in Bhutan as “Drukpa Tshe Zhi,” which means “fourth day of the sixth month of the Bhutanese calendar.”

On this one-day celebration honoring Bhutan’s protector god, Palden Lhamo, only Thimphu observes a holiday. Kuenga Gyeltshen, who was recognized as the reincarnation of Jampel Dorji, son of Zhabdrung Nawang Namgyel, founded the festival in the 17th century. Three days before the Thimphu Tshechu, the Lhamoi dromchoe is held.

The Thimphu Tshechu, one of Bhutan’s most important festivals, begins on the 10th day of the eighth month of the Bhutanese lunar calendar. The Tshechu is a festival in celebration of Guru Rinpoche, the Indian saint who brought tantric Buddhism to Bhutan in the eighth century. Over the course of three days, monks and laypeople conduct mask dances in the open air. The Thimphu Tshechu was established in 1867 by the 4th Desi, Gyalse Tenzin Rabgay. Every district in the country has its own Tshechu, which varies in length and date but always falls on the 10th day of the month on the Bhutanese calendar. For this tsechu, the holiday is only observed in Thimphu.

In Bhutan, Thrue Bab signifies the end of the monsoon and the start of the harvest season. Buddhist astrologers predict that on this day, a celestial rain of ablution will fall at a specific hour, and that bathing and showering will wash the defilements. Aside from washing, Bhutanese people celebrate the day by spending time with family, eating together with friends, and participating in traditional games such as archery and khuru (dart).

Dashain is the Hindu Himali community’s largest and most important holiday, commemorating the triumph of good over evil. People visit relatives to get tika and jamara from their relatives on Dashain, which is mostly observed by the Hindu lhotsham population in Bhutan. The celebration is also noted for its family reunions as well as the purchasing and wearing of new clothing. In 1980, Dashain was named a national holiday.

In Bhutan and the Indian state of Sikkim, this Buddhist festival is observed as a public holiday. The 22nd day of the ninth lunar month, also known as Lhabab Duchen, is observed.

The day commemorates Lord Buddha’s return to the world after three months of teaching in the upper realm. Buddhists flock to monasteries on the hallowed day of Lhabab Duchen to light butter lamps, burn incense, and give special prayers to Lord Buddha.

Monks and lamas spend the day reading the holy writings and chanting mantras to clean the air. The monasteries place newly painted ladders on the rocks to signify Buddha’s holy descent from Trayastrimsa (The Heaven of Thirty Three), which is a key highlight of this holy celebration.

On November 1st, 2008, His Majesty Jigme Khesar Namgyel Wangchuck was crowned in a public event to commemorate Bhutan’s 100th year of monarchy.

Jigme Singye Wangchuck led major social and cultural improvements in Bhutan during his time as Druk Gyalpo. Bhutan’s Constitution was one of the significant changes he brought about. The call for a constitution is frequently made as a result of revolution or political pressure in many countries. In 2001, His Majesty the 4th Druk Gyalpo formally kicked off the process of developing the constitution in Bhutan.

The constitution was modeled after the post-apartheid South African constitution, which was hailed as a model for enshrining human rights in the law. The ratification of the constitution by Bhutan’s first democratically elected parliament on July 18, 2008 was a watershed moment in the country’s history. It marked the beginning of the country’s transformation from monarchy to democratic constitutional monarchy.

To celebrate His Majesty the First King of Bhutan, Druk Gyalpo Ugyen Wangchuck’s coronation on December 17, 1907, all government offices and agencies will be closed on this day. The Wangchuck Dynasty was created as a result of this, and it continues to rule Bhutan today. Bhutan’s most important national holiday is observed all around the country.

Every year on the 17th of December, we come together to commemorate our National Day, which is a momentous occasion. The observance of this day is to remind us of our forebears’ great sacrifices, who worked diligently for the welfare of our country and people. It is a day on which our generation reinforces our vow to bear our crucial obligation to serve the nation to the best of our ability, and it allows us to express our thanks to those who came before us for handing us a strong, sovereign nation to future generations.

Bhutan Public Holidays are days that are observed as national holidays in Bhutan, as well as days with cultural and traditional significance. New Year’s Day, Christmas, Memorial Day, Independence Day, and many other public holidays are included in the list of Bhutan public holidays. All of these days have historical and cultural significance, so they are commemorated in schools, colleges, and institutions with special themes. As a result, students have a lot to learn during the holidays.

Bhutanese public holidays are the time of year when people plan to spend time with their families and friends. The time of year when Bhutan Holidays are announced is the 2021 holiday list. Everyone in Bhutan looks forward to the holidays, whether it is children, office workers, parents, school teachers, or daily workers.

Are you struggling to plan an ideal holiday? Click the link to learn about step by step guide to planning your ideal holiday.